The telecommunications sector is proving to be one of the best sectors at adapting to the current pandemic, with communication service providers stepping up and leading the way in providing solutions and services to a globally changing work environment. 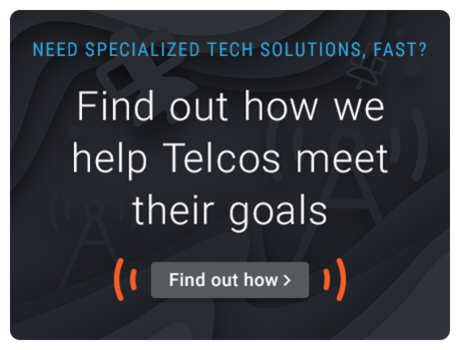 The ongoing shift to remote work, virtual collaboration, and meetings have weighed heavily on telecommunications networks and has pushed service providers to expand network infrastructure and technology improvements to the forefront of their business plans. This article talks about the pressures the telecommunications industry feels, what they are doing to relieve them and what to expect in the post-COVID future.

Telstra, a global leader in telecommunications and technology, reports that it has seen up to a 35 percent increase in traffic overall on its international network, driven mainly by the millions of people worldwide that have shifted to digital interactions for both work and play.

Virgin Media reported that households downloaded an extra 325GB on average (enough data to watch 3.5 hours of Netflix) during the lockdown of 2020. They also said upstream traffic, data used for video calls, playing games online, or sending emails, increased by an average of 3.7GB a week, or the equivalent of 14 hours of Zoom calls.

Meanwhile, Rogers Communications Inc. reported to a House of Commons Committee that home internet usage rose more than 50% in Canada and voice calls on its wireless network were up 40%. Another astounding figure saw calls to 1-800, toll-free numbers up 300% as Canadians worked to access government services in the wake of the March shutdown.

With the second wave of COVID-19 outbreaks still looming and a return to lockdown possibly imminent, how are communication service providers poised to respond to an ever-increasing demand on network connectivity?

How telecommunication service providers are responding to demand

In a report published by Deloitte, many telecoms are using this time to look at the long-term prospects of their network and, in some cases, bringing projects and improvements that were previously slated for years down the road to the forefront of their tech spend. These projects are focused on increasing the capabilities of their current infrastructure to maintain high usage and look at moving up timelines for instituting new technologies, such as 5G, because of increased speed and reliability.

We are already starting to see the industry take opportunities to improve its networks and offerings:

Throughout the coming months and well into next year, we will see Telco executives reassess their budgets and strategic plans to ensure network reliability and maintain customer service levels, as well as push for the advancement and implementation of new, advanced technologies.

What new technology will telecoms need to meet rising demand?

Along with network and infrastructure upgrades, telecommunications providers have also been hit with the reality that their frontline and customer service workforces are now increasingly remote and will be for the foreseeable future. New tools and automation to improve the speed with which their employees can respond to customer service and sales issues will need to become significant projects as the trend of remote work and support continues.

Expanding self-service options and increased use of artificial intelligence (A.I.) in chatbots are two ways telecoms create new opportunities to serve consumers better. These methods and tools are designed to speed customers through the sales process with little to no human interaction or intervention. This trend is becoming more and more popular in our digitally connected environment.

Focus on extending A.I. and automation capabilities throughout their organizations to strengthen all their critical business functions has also been identified as a crucial part of new digital transformation roadmaps by Telco executives.

“Four in five telco executives are either reevaluating the speed of their automation initiatives or taking steps to significantly adjust existing plans.” according to research from EY Global, or Ernst & Young Global.

"Before the crisis, EY research showed that telco executives were not satisfied with their current transformation road maps — 46% believed that a lack of long-range planning was holding back automation initiatives while 67% saw a lack of skills as a barrier to maximizing AI. Fast-forward to the present, four in five telco executives are either reevaluating the speed of their automation initiatives or taking steps to significantly adjust their existing plans."

When looking at these initiatives and plans, many telecoms may come to realize that they require outside expertise and a partner with a deep understanding of the critical issues and competitive pressures inside and outside of their organizations. A partner that integrates into their business strategy and drives the development of technology-based solutions, just as Acro Media has done in our telecommunication service provider partnerships.

The telecommunications industry has proven that it is an essential service in keeping the world working and moving forward. With a continued focus on customer service and providing the best possible solutions and technology available, telecom service providers will define our digital life and work into the future.