Black Friday is by far the biggest shopping day of the year. It’s a recognized “holiday” where people salivate over getting the best deals on their favourite products.

Black Friday is also the busiest and most hectic day for both online and offline retailers. With everyone scrambling to get the best deals, business owners normally triple, quadruple, or even 10X their expected daily sales and revenue.

While this is great, it can cause some major problems. An influx of traffic from hungry customers can cause site crashes; servers can go down and with thousands of people ready to pull out their wallets and buy, this can mean thousands of dollars left on the table if your site does not perform the way it should.

What we did to ensure the best possible outcome

One of the first things we did was put a code freeze on the site one week before Black Friday and all Black Friday weekend. The last thing we wanted to do was launch something on the site during the busiest time of year.

We also ran stress testing on their website a week beforehand. This is the process of sending as much traffic as possible to the site until it breaks. In doing this, we can find out why the site broke and come up with a solution to make sure it doesn't happen again.

We also had a temporary hosting package upgrade for one week. Again, this was another safety net to make sure the site performed 100% on Black Friday.

And to top things off, on the day of Black Friday we had one dedicated developer, two dedicated PMs and a dedicated resource from our hosting company monitoring the site to make sure everything was working the way it needed to.

After making sure everything was set up properly here are the final results.

Site Performance
First off, the site didn't crash once during the Black Friday weekend! Goal achieved.

While the site traffic increased and transactions per minute (throughput) spiked compared to an average day, the site remained normal and response time (site speed) remained stable. This means, not only did we achieve the goal of keeping the site from crashing, but customers didn't have to deal with a slow lagging site due to high traffic volumes. 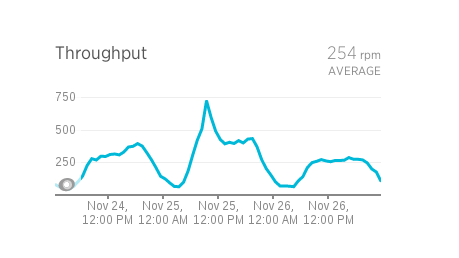 Aside from site performance and keeping the site from crashing, The Vault Pro Scooters had one of their biggest revenue-generating days EVER. While I am not going to share exact sales numbers with you, their daily revenue on Black Friday was about 12X their average daily revenue!

It was a success.